< Back to Knowledge Base 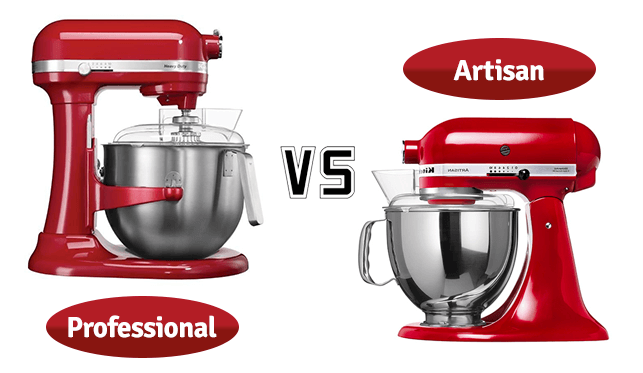 The choice between the two can be a bit of a task, but this article is here to help and it doesn’t have to be the most stressful decision you’ll have to make. We are going to go through the few, but very important differences which make the professional mixer the one to go for.

The Artisan mixer hasn’t really changed in appearance for decades, and is trusted by many cooks and bakers for its power and reliability. It’s one of the top rated mixers with a very high percentage of user satisfaction.

Any time a product is bold enough to use the words ‘professional’ or ‘commercial’, it is taking on the burden of having to work as good as the top of the line equipment found in restaurants, and used by professional caterers and chefs. This model stands toe to toe with any of the higher end mixers on the market.

Let’s begin with price comparison. In fact, there’s very little difference between the two 6.9 litre entry level ranges so we can’t really go off this as a pro or con. The only comparison would be, is that the Artisan model can come in all various colours and designs which naturally would increase the cost of the unit. Then there’s the slightly more expensive 6.9 litre professional mixer (5KSM7990XBER) which comes with added features and is around £100 more than the entry level 6.9 litre model (5KSM7591XBER).

They both share many of the same features, and you’ll be able to accomplish many of the same tasks. They both also look very similar. Many users of both have said that they could only tell the difference when the jobs got too big in scale, and that’s when the Artisan mixer started to lag behind.

Since they are both made by the same company, and one that’s been around for several years and stands behind their products, you’re getting peace of mind knowing that these are a quality machine. This is a big factor, since if you want to add accessories to your mixer later, you’ll be able to find them easily since it’s such a popular brand.

The main difference between the two models is the how sturdy and robust the professional mixers are compared the Artisan models. The professional range of mixers are products you don’t have to worry about replacing for a very long time, and many users report having their mixer for several years, even over a decade, so the cost isn’t such a factor when spread over a long period of time.

The professional mixer range come with better quality attachments than the Artisan model which in turn will last longer before becoming worn.

The entry level 6.9 litre professional mixer also comes with a pouring shield whereas the Artisan doesn’t.

Ultimately, you’re going to get a great mixer no matter which one you go with. It’s really a matter of sizing up the sort of jobs you expect it to do, and deciding which one fits your lifestyle and your needs the best. They’re both going to mash the potatoes to a wonderful whipped consistency, get the cookie and bread dough just right, and leave no lumps in the gravy.

If you’re going to be using your mixer once or twice a week then go for the Artisan model, but if you are looking to use your mixer every day or more regular then the professional models are the ones to go for.